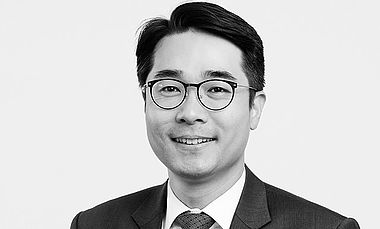 Mr. Minkyu Jung studied electrical / electronic / communication engineering at Korea University in Seoul, South Korea. He passed the Korean patent attorney exam in 2009 and was admitted as a Koran patent attorney in 2010. Since 2013, Mr. Jung has been a registered member of KPAA (Korea Patent Attorneys Association).

Mr. Jung worked at a noteworthy intellectual property law firm in Seoul for seven years as a patent attorney. His practice focused on Korean patent law, including the preparation and prosecution of Korean application as well as outgoing processes for European, U.S., Canadian, Chinese and Japanese patent applications. During his career in Korea, he had been mainly involved in digital TVs, standard (essential patents) for digital TV system (DVB-3DTV, DVB-NGH, DVB-T2/C2, ATSC-PSIP, ATSC-NRT, ATSC 2.0, ATSC 3.0, ATSC-3DTV, ATSC-MH), standard for audio codec (MPS, SAOC), internet and signal processing. He also took roles as a consultant for creating essential patents on national businesses managed by Korea Intellectual Property Strategy Institute and a lecturer for seminars “Utilizing US and Korean Patent Laws for creating essential patents” managed by Essential Patent Center.

Mr. Jung joined WUESTHOFF & WUESTHOFF in 2017. His current focus is on patent prosecution and litigation in the fields of electrical engineering, information and communication technology, and electronics.